Adib Ahrari and Ali Jumaa have started the company Datana together with five fellow students from Uppsala University and KTH Royal Institute of Technology. They aim to reduce thefts from shops using smart technology that helps store staff to work preventively.

Datana’s goal is to make shops more secure and prevent theft. And the market is crying out for more effective solutions. Despite increasing investment by shops in measures such as security guards and alarm systems, theft continues to increase. According to data from the Swedish Trade Federation cited by Datana, over the last decade the value of stolen goods has doubled from SEK 4.2 billion in 2010 to 8.5 billion in 2021.

“These figures are shocking and our many conversations with store staff and owners have certainly confirmed just how extensive the problem of theft is; so, our goal is to reverse this trend,” says Adib Ahrari, CEO and cofounder of Datana.

The company is developing an AI-based solution that processes data from existing in-store cameras and sends notifications to staff that help them anticipate thefts. Notifications are delivered to a smartwatch, warning staff that a theft may be about to take place.

“The whole point is to create a proactive solution for store staff, so that they can act before a theft actually takes place. This is often as simple as store personnel showing themselves and perhaps asking if someone need help with something, or offering a shopping basket,” says Datana cofounder Ali Jumaa, the company’s head of marketing.

The focus of Datana’s solution is behaviour, and its AI trains on videos that capture a theft being committed. The AI analyses and looks for patterns of movement and behaviour that might indicate that someone is preparing to shoplift. Examples of such behaviour include the length of time someone spends at or circling the same part of the shop, or how many times they glance up at CCTV cameras. Another factor it considers is the time of day.

Adib Ahrari explains that he has spent a great deal of time on privacy protection measures during development.

“This was one of the first things we thought of, that our solution must be in total compliance with the General Data Protection Regulation (GDPR). We do not process any personal data, store any biometric data or use any facial recognition technology.”

He goes on to explain that all data is encrypted and that none is stored, archived or transmitted. All data processing is performed by an in-store server that runs Datana’s software.

From concept to realisation in only a year

Datana’s progress has been rapid. The company recently launched its first prototype, only a year after commencing R&D. Supermarkets are first in line.

“They are the most vulnerable to theft and they invest most in security measures, so everything suggests that they should be our early adopters. For example, meat is highly prone to theft and there are almost always extra cameras installed at meat counters,” says Jumaa.

The aim is to have the prototype installed in a handful of stores as early as summer 2022, and the company is already in discussions with several supermarkets that are keen to test the technology. If everything goes to plan, and the solution does its job, Datana expects its first paying customer next summer. After that, sights are set on the major supermarket chains and, eventually, other types of shops. And not only in Sweden. Datana is already eying an international launch.

“Right now, it’s all about demonstrating that our solution can actually reduce theft. If we can manage that, we believe that we can make a broad impact relatively quickly,” says Ahrari.

The team is everything

Both Ahrari and Jumaa are convinced that the team of seven behind Datana is the main reason that things have progressed so quickly.

“We have succeeded in gathering people with a good mix of different experience and skills. We also share the same strategic vison and high level of ambition, which is a key to success,” says Jumaa.

It was Adib Ahrari who took the initiative.

“It seemed entirely natural to assemble a team and develop a business idea together. I know so many engineers and while studying there is every opportunity to test an idea to see if it has wings, so I quite simply wanted to grasp the chance.”

Both Ahrari and Jumaa see the rapid progress of a startup as a big part of the attraction.

“At Datana, once we decide to do something, it basically happens straight away. And then there is the freedom of both creating something new and being able to exert influence,” says Ahrari.

During its first year, the team at Datana has been supported by UU Innovation and the Uppsala Innovation Centre (UIC) as well as KTH Innovation. 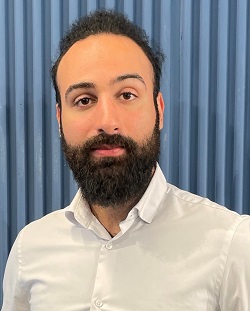 ADIB AHRARI
Age: 24
Lives: Märsta
Background: Degree of Bachelor of Science in Electrical Engineering from Uppsala University.
Currently: Cofounder and CEO of Datana while studying for a Master’s Degree in Mathematics at KTH.
Tips for aspiring entrepreneurs: Get out and talk to customers early; don’t sit on your solution too long before having the courage to test it! 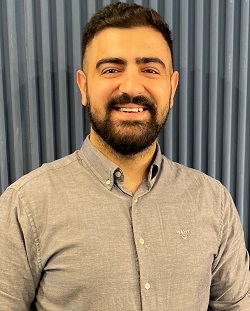 ALI JUMAA
Age: 27
Lives: Tumba
Background: Degree of Master of Science in Vehicle Engineering and Master’s Degree in Integrated Product Design from KTH.
Currently: Cofounder and CMO at Datana, while working full-time elsewhere as a digital solutions specialist.
Tips for aspiring entrepreneurs: Assemble your team and make sure you share the same goal and ambition.