Mamoun Taher's discovery has given industry the key to large-scale applications of the “miracle material” graphene. He is now combining his researcher role with the role of Director of Technology and CEO of the new company Graphmatech AB. 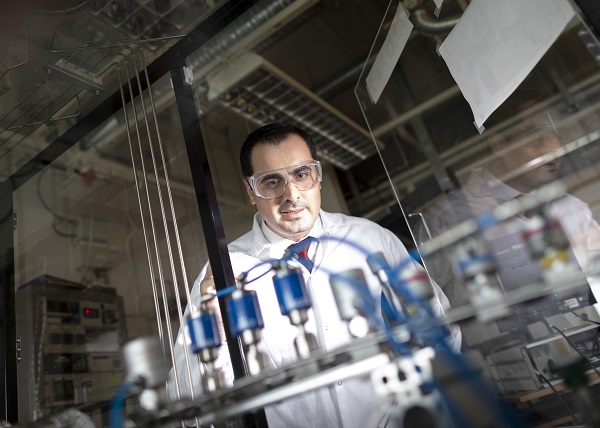 “I've grown a lot as a person during this journey. Today, thirty percent of my time is spent researching and the rest is devoted to my company. I am driven by the desire to create benefit for as many as possible,” explains Mamoun Taher.

Graphene is the world's thinnest material, only one atomic layer thick. It is bendable, approximately 200 times stronger than steel, and conducts electrons more effectively than silicon. Because of all of these traits, there has been great interest in creating applications in areas such as electronics and the telecom industry.

“But previous experiments were not fruitful. When the material is used on a large scale, the graphene flakes tend to stick together and lose their amazing properties,” explains Mamoun Taher.

As a researcher, Mamoun Taher solved the problem through a number of steps. The first was finding and applying the right chemicals, called separators.

“We expected to start out with two or three projects. But, before our first year is over we will have about ten projects up and running in partnership with major companies,” says Mamoun Taher with a bit of amazement.

As a student in Syria, his aim was to succeed abroad. He earned a Master's degree in biomaterials, worked as a teacher at the University in his spare time, and worked nights at a textile factory to improve his finances.

“Sleep was a bit of an afterthought, but I was young. It all led to an Erasmus scholarship with studies in Germany, and then my doctoral studies in Luleå, Sweden,” explains Mamoun Taher.

Since 2015, he has been a researcher at the Ångström Laboratory of the Department of Chemistry, working in close collaboration with ABB in Västerås.

Naturally, the composition of the separators in Aros Graphene is a company secret. Mamoun Taher contacted an advisor at UU Innovation early on to learn how to protect his discovery.

“Uppsala University has fantastic support for researchers who want to enter the business world. We had a fruitful meeting, and the advisors were then involved through the whole journey and provided guidance in relation to intellectual property rights and patents.”

Mamoun Taher also completed UIC's programme for new companies, received support from Vinnova, and is now working in close collaboration with companies such as Ericsson and their subcontractor Nolato Silikonteknik.

“We visit their lab with our material, test it on site, and train them so they can utilise the technology in their operations. The end product is used to cool computer electronics.”

Mamoun Taher's ability to convince shrewd businesspeople was something he developed over time.

“It was key for me to get exposure in both the scientific community and the commercial environment. Today, using my skills to sell my research results is the most rewarding thing I know.”